How to distribute money to people: UBI-Vault

The main motivation for developing UBI-Vault is ideological—to drive societal change. Now is the time to change society. We all feel it’ up to us to try and become the change we want to see in this world.

As a society, it’s time to embrace working smarter, not harder & put  automation to work for the betterment of all of us, not just people in search of a higher profit margin.

A solution is to buy companies and donate them to the community, they are then called AI DAOs, owner-less companies, which contribute their revenue to the community. With these resources food, shelter, education, public transport and medical aid can be provided.

On the way to this solution, where a global government or a decentralized government is in control, countries and multinationals and sponsors can contribute to a Universal Basic Income (UBI). Such a UBI will provide the resources for food and shelter, to begin with.

How can we distribute money, from donations and countries and multinationals, and later from AI DAOs, to the people?

To do exactly that we made UBI-Vault:

UBI-Vault is a simple distribution system which takes donations from private persons, companies, governments and multinationals, and distributes this money automatically as a Universal Basic Income, UBI, to all people registered to the UBI-Vault.

We solve the problem of how to automatically distribute UBI (Universal Basic Income) money to citizens, so that it is easier for organizations and governments to decide to contribute money to the UBI-Vault.

We use blockchain security technology, with Ether as cryptocurrency and smart-contracts as programming tools. By using blockchain technology the UBI-Vault is very resistant against fraud, the automatic distribution system works without human intervention. Any money transfers are visible for anybody on the public blockchain. Citizens will use a mobile phone for identification; later on biometric access methods can be added. Eventually, the only thing the UBI-Vault needs to ‘know’ is: are you a unique human being?

Self-owning machines and companies (AI DAOs) can deliver their surplus to the UBI-Vault, the money is then automatically distributed to UBI-citizens.

(Read more about AI DAOs and how these can change our world: Nature 2.0 The Cradle of Civilization Gets an Upgrade )

It is also possible to transfer conventional money into the UBI-Vault, which makes it suitable for all kinds of funding.

People can register as citizen with our UBI-Vault app (feel welcome to try our beta app here: UBI-Vault Android app. Citizens have their own wallet to receive money from the UBI-Vault distribution system.The UBI-Vault aims at supporting as many people as possible, independent of their income.

As we can see from cash-transfer programs organized by Give Directly and experiments in Namibia and India, a small amount of money every month can make a huge difference.

UBI-Vault citizens receive their UBI in crypto currency and can either use that to pay with directly or exchange it to a currency of choice.

You can support the development of this not-for-profit project by sending a donation to: UBI-Vault 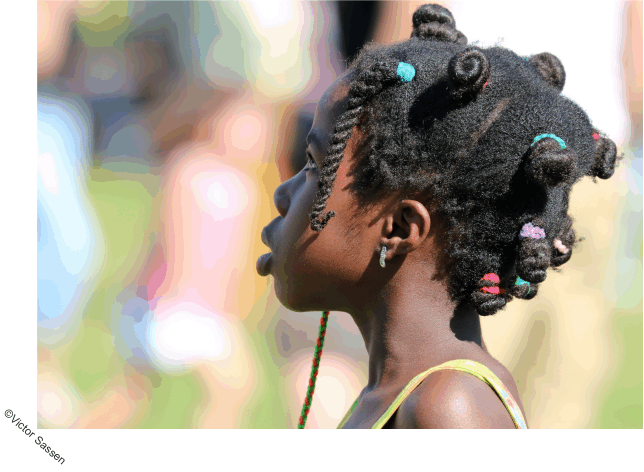 B             app checks for uniqueness of phone number with SMS verification

95% of incoming Ethereum is distributed among citizens, 5 % is for maintenance of
the system.

Once a week when AE/AC> AB then transfer AB to every citizen`s wallet. 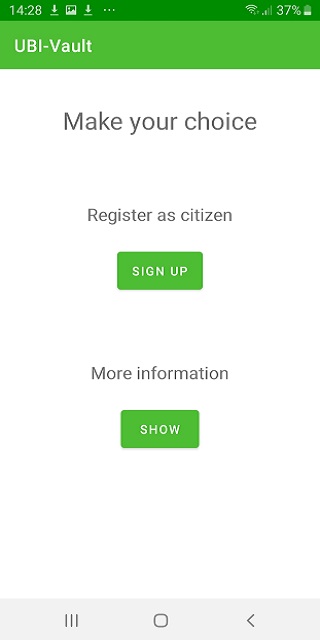 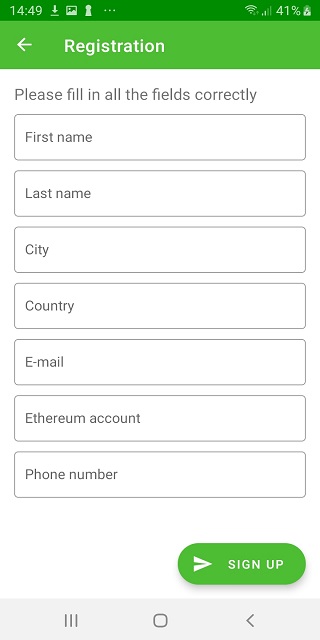 1 Every week, when there is enough money in the UBI-Vault for every citizen, a basic income is distributed , starting with € 7,00.

2 when during three consecutive weeks there is a surplus of € 7,00 for every citizen in the UBI-Vault, the basic income amount is increased with € 7,00.

Course fluctuations of the digital currency Ethereum are corrected for automatically, so that a constant amount of basic income, in €, is sent to the citizens.

In the future we want to guarantee a UBI-Vault basic income of one year.

As a consequence there will be a UBI-Vault buffer and a citizens` waiting list.